Our Fire Alarm Partners Eaton manufacture and supply a range of different types of fire systems, meaning we can provide a high quality fire solution whatever your need is. There is a vast array of fire detection systems and devices on the market today, ranging from the relatively simple to the most technically sophisticated. Modern automatic fire detection systems are available in two types, conventional and addressable – which, broadly speaking, tend to be used in smaller and larger installations respectively. The control panel is the hub of the detection system. All the devices which are part of the fire detection system is connected to this central panel which processes the signals received from the input devices and gives out signals to the output devices. Input devices such as detectors measure signals of combustion and communicate with panels, which in turn trigger output devices such as an audible or visual alarm device. Fire alarm panels can be further sub segmented into addressable or conventional panels. The size of the building determines the number of detectors that would be required. The system works via the control panel receiving signals from the detection devices and then sending transmitting signals to the notification devices.

The philosophy of a conventional system revolves around dividing the building into a number of areas called zones. The detectors and call points within each zone are then wired on a dedicated separate circuit. In the event of a detector or call point being triggered, the panel is able to identify which circuit contains the triggered device and thereby indicate which zone the fire alarm has come from. The indicated zone can then be manually searched to locate the triggered device. With this type of functionality, a conventional system is best used in smaller builds where it wouldn’t be difficult to locate the triggered device in a given zone. 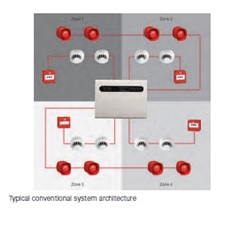 Two-Wire systems are based on standard conventional system technology, but it also incorporates additional functionality to enable the call points, detectors and sounders for each separate zone to be wired on a single common circuit. By combining both the detection and the alarm annunciation wiring into a single circuit, considerable savings in installation time and cabling can be achieved. 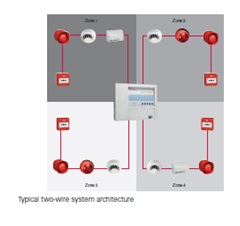 What are Addressable Fire Alarm Systems?

An addressable fire alarm system is made up of a series of fire detectors and devices that are connected back to a central control panel.

With addressable systems, each device has an address or location, enabling the exact detector that was triggered to be quickly identified. This makes addressable alarm systems ideal for large buildings, particularly commercial premises spread over a wide area.

Fire alarm systems that can be programmed

One of the biggest advantages of addressable fire alarm systems is that they can be configured so that a specific action triggers a specific response.

For example, cause and effect programming can be used to say that a particular ‘cause’ such as activation of a fire detector, has the effect of alarms sounding in a specified area and the system being put on alert mode in another. This means that phased evacuation can take place, with priority areas evacuated first. Each area of a building can then be evacuated one at a time, which allows safer fire evacuation procedures in large buildings.

False alarms cause disruption and can be costly, so it’s in any business’s interests to minimize their impact and reduce the likeliness of them occurring in the first place.

One of the advantages of addressable fire alarms is that they can allow air to be monitored through the detectors, so if air is contaminated for example with dust (which can activate some fire alarm systems) then a ‘pre-fire’ warning is triggered. This allows investigation to take place, so any issues can be rectified before a full scale false activation of the system takes place.

Due to the way that addressable alarm systems are connected, any breaks in the circuit caused by damage are less likely to result in devices being disconnected. Unlike conventional systems, all devices are wired up on a loop and are connected to the panel unit at both ends. Therefore if connection breaks at one end, devices will still be connected.

Cost of wiring up alarm system is cheaper

Addressable fire alarms are wired on a loop, which is basically a circuit that connects the system to other devices such as sprinkler systems, call points and detectors. With conventional fire systems each zone and sounder circuit has its own wire, so the cost of wiring can potentially be higher, depending on how many devices need connecting up.

Monitoring and checking all individual fire detectors for faults

Fire alarms are arguably one of the most critical aspects of fire safety on your premises. Another benefit of addressable fire alarm systems is that all devices can be individually monitored and checked for faults, which makes maintenance easier. If an issue is found with a particular detector for example, then a notification will be received by the central control panel.

Having an addressable system therefore means that any problems can be discovered immediately so that they can be rectified, ensuring that everything is in good working order should an incident occur?

The Benefits of our distinctive intelligent Addressable Control Panel are listed below: 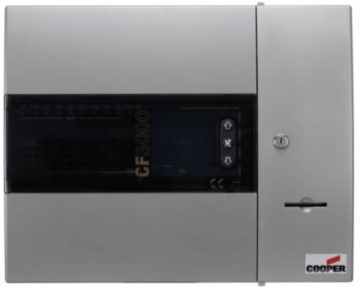 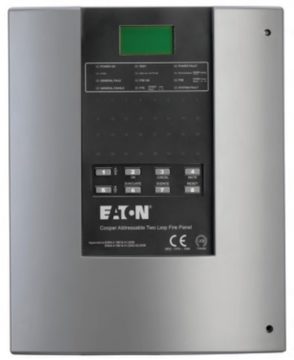 Kougar Solutions & Allied Services is the name to trust, when you think of security, vehicle scanning, fire alarms and access control management systems. You are always welcome to be part of us.

Send us a WhatsApp Message

You can now shop and request for Quote for over 1000 Items on the online store. Dismiss